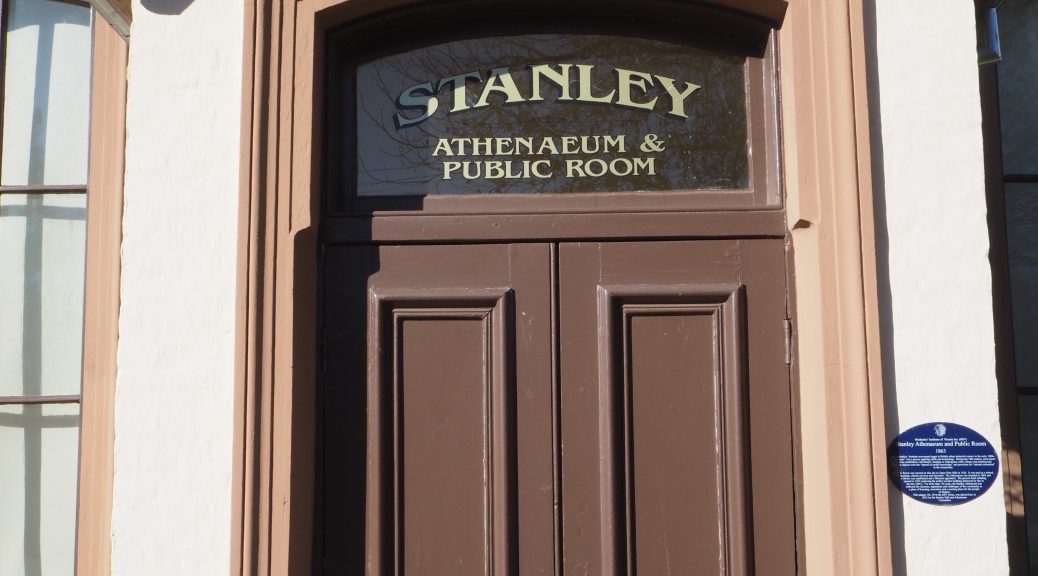 How do you establish the existence of a literary institution’s collection when none of the early records have survived? How can you trace the circulation of books without a catalogue or accession records? How do you determine the way an institution was managed if the committee minutes have disappeared?

These are some of the questions I have been trying to answer during my research trip to country Victoria. As part of my SouthHem case study I have been visiting the collections of five mechanics’ institutes established during the Victorian gold rush: Sandhurst (Bendigo), Beechworth, Chiltern, Stanley and Ballarat. The Stanley Athenaeum where I have spent the last few days has offered some surprising answers. Established in 1863, the Stanley Athenaeum is one of only a handful of Victorian mechanics’ institutes with a remnant collection. The survival of this collection is even more remarkable considering that the initial building was lost to a fire in the late 1860s and the Athenaeum faced a second fire in 1901. An 1858 edition of Lord Brougham’s Sketches of Statesmen even includes the inscription: “saved from the flames, 1901”. Unfortunately, the records of the collection have not been as lucky with the earliest surviving minutes dating from 1890 onwards. As my case study concerns the period 1854 – 1870, these minutes do not provide information about the first Stanley Athenaeum committee. Newspaper reports from the Oven and Murray Advertiser provide some insight into the managing of the first committee with two reports of annual meetings in 1865 and 1866, but there is very little information concerning the actual library collection.

As a process of elimination, I set about documenting, with the help of the volunteers at Stanley, any book classified as fiction in the collection with a publication date before 1870. It soon became clear that the books could reveal some of their circulation history as most of the Stanley collection is covered in bookseller stickers. Most of these are from Mudie’s Select Library (London) or Mullen’s Library (Melbourne), but there are a handful of books from Whittingham’s Circulating Library (Southwell) and even one from Joseph King’s Cheap Circulating Library in Norwich. Records of the Beechworth Athenaeum kept at the Burke Museum in Beechworth provide some corroborating evidence of the connections between these institutes and their booksellers. Beechworth Athenaeum has the opposite problem to Stanley: it has records dating back to 1865 but almost all the books have been lost. Beechworth’s records indicate that they had a standing order with Mudie’s in London and also bought books through Mullen’s. Although Stanley was a smaller institute in comparison to Beechworth we can assume that they followed a similar system.

The publication date does not, of course, indicate when the books arrived in the Stanley collection, but the Athenaeum’s own library stamps may help establish rough dates. I have thus far found three types of Athenaeum stamps: an embossed stamp, a blue ink stamp and a pink/red ink stamp. The embossed stamp appears to have been used with the earlier collection whereas the blue stamp correlates with books in the mid-late 1880s and 1890s, and the pink/red stamp appears to be used after the 1900s. There is also the inscription “Stanley Athenaeum” – most likely the librarian’s – on many of the earliest publications which may predate the embossed stamp. This is at best an imprecise science and the entire Stanley collection will have to be documented in more detail before any firm dates can be established. Inscriptions can give us further signs as to how the collection was managed and the popularity of certain genres and titles with varying borrowing lengths of 7, 10 or 14 days. In a few cases, they offer some information about the earliest committee members and donors.

I am only half-way through my research trip, but it is clear that while these remnant collections offer challenges they can also provide exciting clues into some of the earliest libraries in Victoria and life on the gold fields. My next stop is the Ballaarat Mechanics’ Institute and I look forward to presenting some of the findings at the Institutions of Literature workshop and the BARS conference in July.

I am very grateful to Chris Dormer and the Friends of the Stanley Athenaeum, and to Linda Peacock at the Burke Museum for their invaluable help.