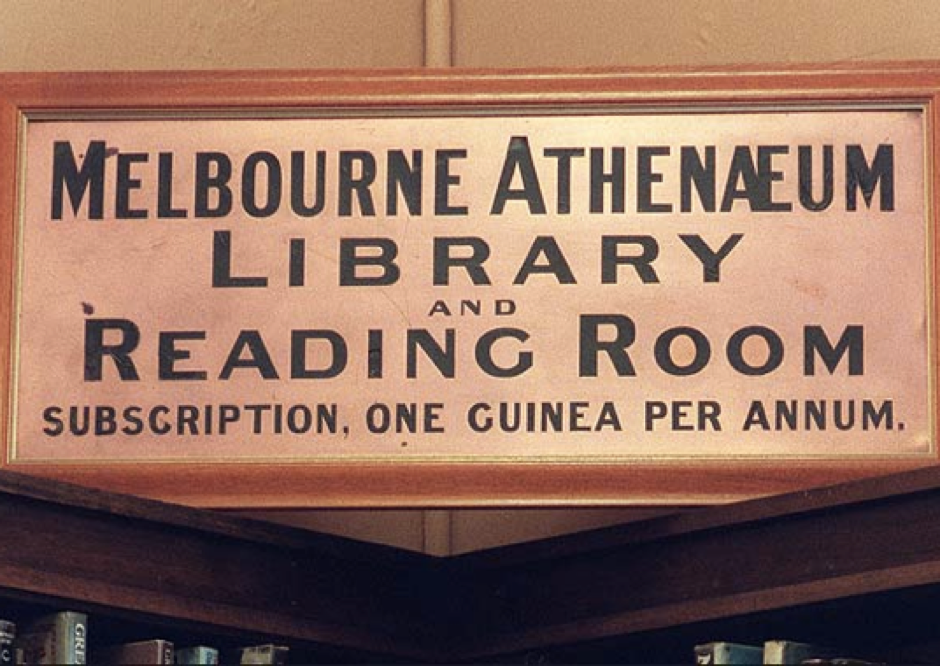 One of the major outcomes of the first stage of the SouthHem project has been the creation of our digital archive of book catalogues from the colonial southern hemisphere. Ranging in date from 1786 to 1870, our archive now includes 444 catalogues from South Africa, the Australian colonies and New Zealand, and the Strait Settlements, many of which have been digitised by the project and made widely available for the first time here.

Over the last year, the SouthHem team has been working on brief descriptions – or ‘glosses’ – of these catalogues and their contents. These glosses function as a general guide for the users of the archive, pointing out features of significance in each catalogue and giving important contextual information. The process of compiling and comparing them has also allowed the SouthHem team to make important findings, and connections, in our joint and individual research.

Far from being mere lists of works available to local readers, colonial book catalogues were often themselves important symbols of local cultural and intellectual activity and ambitions. In our initial tranche of glosses, the SouthHem team has prioritised the writing of descriptions which analyse in detail some of the most unique and significant items in our archive. Sarah Comyn’s gloss on the 1861 catalogue of the Melbourne Public Library , for example, illustrates the extent to which the catalogue itself was ‘designed to reflect the prestige of the library’s collection’. Lara Atkin’s gloss on the catalogue of the Sir George Grey collection (Philology) in the South African Public Library, Cape Town, presents a detailed analysis of the arrangement and contents of a document which has been noted as being ‘highly influential in shaping European taxonomies of indigenous peoples’. Evaluating the function of the catalogues as catalogues, describing their arrangement, and idiosyncrasies, has been an important part of compiling the glosses. It has thrown into relief some of the extreme variation between colonial institutions. The scholarly early catalogues of the South African Public Library, for example, were vastly better guides than the haphazard catalogues of the Australian Subscription Library at the same point in time.

Our research into the context of the catalogues has allowed us to enrich the archive with information beyond that which can be found in the catalogues themselves. In the case of catalogues of auction sales, for example, we have made extensive use of newspaper archives to identify the agents involved in the sales (auctioneers, previous owners, printers and so forth), and note any interesting or important details relating to them. 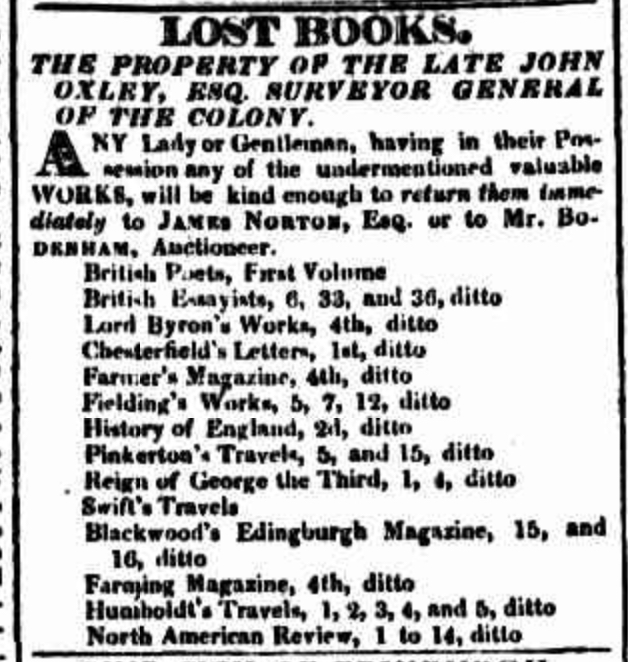 The gloss for the auction sale of the books of the John Oxley,for example, records the fact that the auctioneer advertised in the local press for the return of borrowed books that were rendering incomplete the multivolume sets he was offering for sale, and that the sale extended for ten days longer than the date given on the printed catalogue. We have also been able to use this research to help differentiate colonial auction sales which were the outcome of the importation of books, and those which were the sales of private libraries of ‘gentlemen leaving the colony’, or deceased estates. In the case of library catalogues, we have added details of institutional rules and regulations, and brief historical outlines. While reading practises cannot be inferred by book catalogues alone, with these details we are able to build a more nuanced understanding of the circulation and uses of books in the colonies.

In our glosses, we have also been interested in what the catalogues can tell us not only about the popularity (or likely popularity) of authors, but about emerging global literary reputations and patterns of book circulation and consumption. In an auction catalogue from Sydney in 1835 , for example, Anna Maria Porter is one of the few authors of ‘romances’ to be named along with the titles of her work, suggesting a level of name recognition in the colony. In many of our glosses, we have paid special attention to noting the most commonly appearing authors of imaginative works, and/or to the prevalence of the works of particular publishers, or of publishers’ series. Including this information in the glosses also improves the keyword search functionality of our digital archive, and users will be able to more easily locate particular authors and publishers across different catalogues.

The production of the glosses has also been an important component of researching the progress of colonial libraries, a subject that has become of special interest for the SouthHem team. Analysing the holdings of libraries – expressed through the printed catalogues – at particular points in time has allowed us to map the growth of institutions which were central to colonial cultural and intellectual life. Porscha Fermanis’s glosses on the South Australian Institute show how the library collections developed from its predecessor, the South Australian Library and Mechanics Institute.

My own glosses on the catalogues of the Australian Subscription Library show how that institution’s collection developed over its troubled history, and, via a unique surviving annotated catalogue, how its collection of fiction was culled after the library’s collection was purchased by government to form the Free Public Library of New South Wales.

Informally describing our approach as ‘distant reading by hand’, in our glosses on library catalogues we have devoted special attention to determining the proportions of different genres of books that made up the libraries collections. With the results of these assessments, we have been able to make the first detailed comparative study of the collections of the libraries of the colonial southern hemisphere. The work on genre proportions, as well as the research into the institutional and print culture contexts of colonial libraries, informs the SouthHem team’s book project: Loungers, Loafers, and Littérateurs: Early Public Libraries in the British Southern Hemisphere and Straits Settlements, 1818-1875.

Dr Nathan Garvey is an ERC Postdoctoral Fellow on the SouthHem Project at University College, Dublin. He has previously held research fellowships at the University of Queensland (including an Australian Research Council DECRA fellowship), and at the State Library of New South Wales. 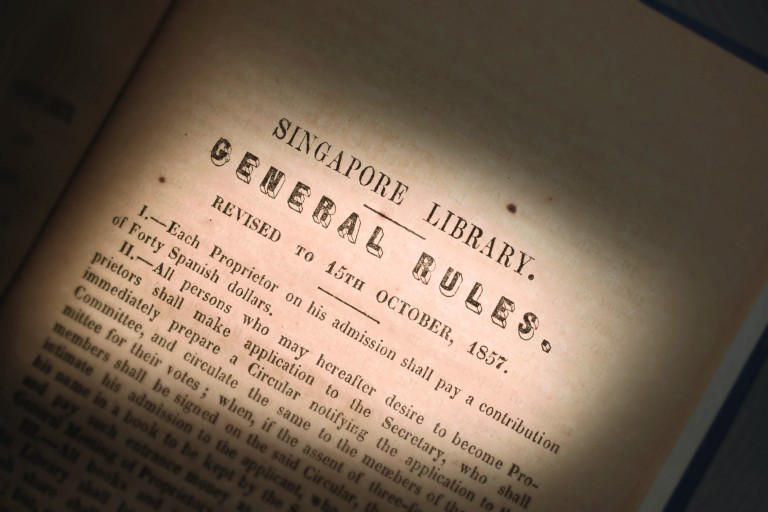 The Book Catalogues of the Southern Hemisphere (BCSH) database aims to provide an explanatory gloss on each of the nearly 500 surviving auction, bookseller, and library catalogues pertaining to the British-controlled Southern Hemisphere and Straits Settlements. These brief glosses will eventually be available on our main website and… 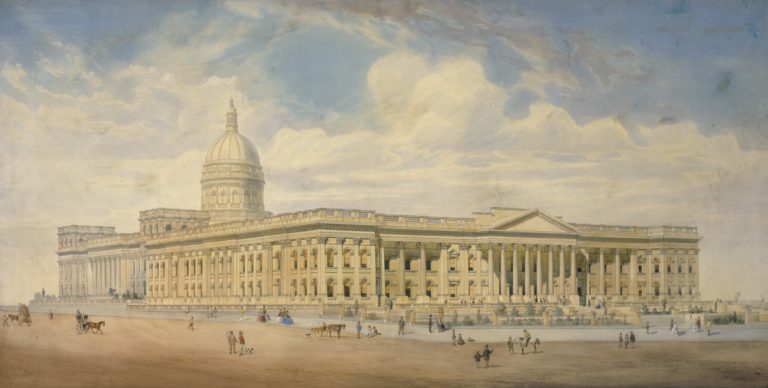 In order to examine how the nature of book holdings changed over space and time in the colonial Southern Hemisphere and Straits Settlements in the nineteenth century, we are creating a database of Book Catalogues in the Southern Hemisphere (BCSH). The catalogues that form our database include: library…